Composites in Manufacturing talks to Graeme Bond, technical director at FDM Digital – a leading UK contract, additive manufacturing provider – about how 3D printing is beginning to make significant inroads in the composite industry.

In F1, automotive and aerospace, additive manufacturing has already moved beyond prototyping and is being used to print production parts. And whilst it’s been on the scene for several years now, for those who are still unsure, can you give us a layman’s explanation of what it is?

“3D printing or additive layer manufacturing as it’s also known, is a process by which a 3D object is grown from literally nothing by continually building or fusing a material layer on layer forming the part created digitally in a 3D CAD design package,” Bond begins.

So why is 3D printing growing in popularity in the composites industry?

“F1 were early adopters of 3D printing seeing the potential it offered to take concept models of any complexity from digital data to prototype or finished part bringing new developments to track faster and at a lower cost.”

Can you explain what soluble core technology is and the process involved?

“Soluble core is a filament material designed to be dissolved which makes it perfect for carbon wrap applications. However, adding FDM Digital’s engineering input this is now also being extracted with certain types of 3D geometry.

“First you build a 3D printed surface finished mandrel upon which carbon fibre can be laid. The carbon and core are then autoclaved curing the product on the mandrel but then by dissolving or extracting the core in a secondary operation this leaves the hollow composite final component.

“Another popular carbon application using our ULTEM-9085 high temperature FDM material, we can design and manufacture complex lay-up tools that can withstand high temperatures and pressures creating solutions for the motorsport industry.”

Is the technology migrating across other sectors?

“We are seeing a natural progression from the fast paced F1 world into the aerospace supply chain which will change the manufacturing thought process for current and future aircraft programmes.

“Take aircraft tooling, jigs and fixtures. 3D printing allows complex patterns, jigs and tools to be built without the need for hours of machining with the added benefit of turn-around times of days rather than weeks. Produced straight from CAD these solutions are a quick and simple alternative to traditional methods.”

“We were asked if we could come up with a composite tool to replace their old aluminium tool which was heavy and damaging the carbon wing covers resulting in costly repairs, plus its weight meant it was becoming a health and safety issue for the operators lifting it into place. We solved this problem by printing and assembling a new tool in carbon fibre infused Nylon (CF12) material, which gives added stiffness and strength – in just 40 hours.”

Bond is justifiably proud of this project. Customer feedback has been excellent and it’s estimated the 3D printed part has saved them £20,000 per year in concession repairs, plus it’s addressed the health and safety concerns too.

You’ve touched on using 3D printing for aerospace tooling, but how about actual flight parts?

“3D printing is being used more widely in the aerospace industry, but again I think the full potential is yet to be realised. By their very nature, aircraft assemblies are complex in design but 3D printing gives designers the freedom they need to create intricate 3D geometric components that would otherwise not be possible to manufacture by traditional methods due to tooling design limitations. Furthermore, 3D printing can produce low production volume customisable parts that typically weigh considerably less than their traditionally produced counterparts. For aerospace this is big news as weight saving is fuel saving.

“We’ve produced tens of thousands of flight ready components using ULTEM 9085 FDM material that are manufactured to AS9100, building non-load bearing components parts for the Airbus A350 XWB programme in a flame retardant material with full batch traceability.”

So, is 3D printing set to take over the composites world?

“As with any new technology, there has been a lot of hype about what 3D printing can do. As engineers, this irritates us as I like to keep things firmly rooted in the real world. However, I get blown away when I think about the types of solutions 3D printing combined with engineering and design expertise could offer composites manufacturers.”

Bond is certainly putting his money where his mouth is. Formed in 2012 backed by Mercia Technologies and Rosebud, FDM Digital claims to have the largest commercially available 3D printing capacity in the UK combined with the largest build envelopes on the FDM Process.

The Burnley-based company, boasts nine Stratasys machines and has recently invested in a cutting-edge HP Multi Jet Fusion machine – the only one in the UK commercially available specifically targeting the aerospace, automotive and F1 sectors.

“It’s 10 times faster and cheaper to run than any other 3D printer and can produce hundreds of parts in a set build time which gives it a mind blowing volumetric build envelope advantage over any other 3D printer on the market today,” Bond concludes. “It’s going to be an industry game-changer which will help us reduce our customers’ lead-times and costs, increase speed to market as well as add design value to their products.” 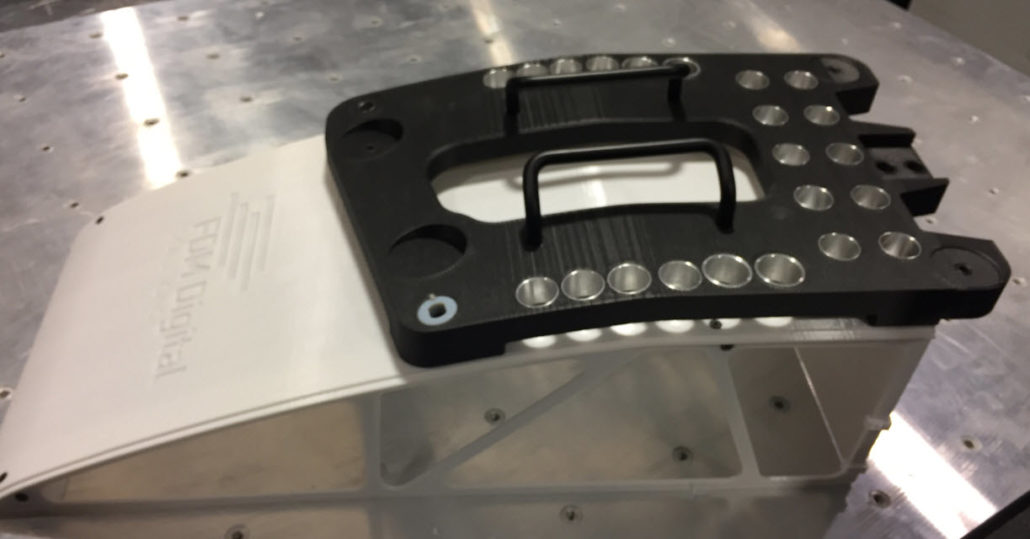 Click here to be directed to our Industries page, where you can find more information about the industries we work within